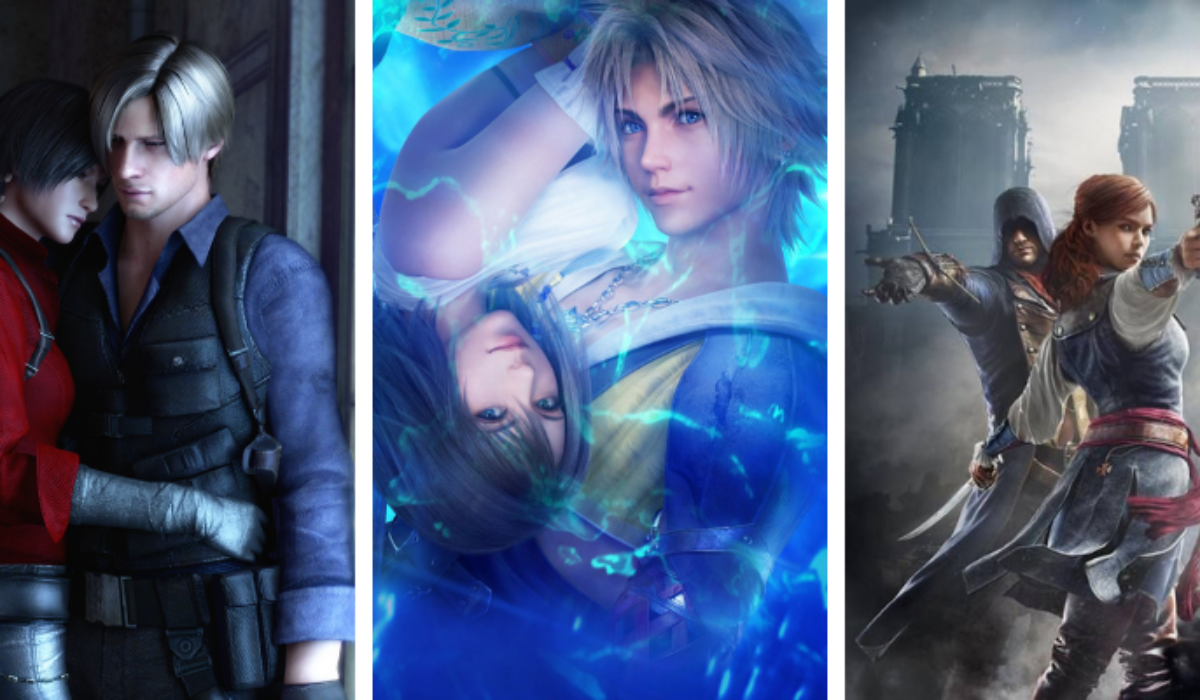 Whether you celebrate Valentine’s day, or you don’t, you still have to agree that at some point in your existence, you have fawned over some video game couples — at least once. Because even in things like video games, it’s hard to run away from the lure of a remarkable love story.

Don’t even think about denying that you’ve found video-game couples interesting at some point during your gameplay. Because as they say, love makes the world go round.

So, in honor of today’s celebration of Heart’s Day, I’m going to jot down three video-game couples that I’ve personally found to be quite interesting. I have my own reasons for why I think they’re interesting, so bear with me.

These two first met in Resident Evil 2, when Ada was trying to complete a secret mission. Leon was a rookie for the Raccoon City Police Department at the time, and he was just trying to get away from the city with his life intact.

It’s a slight cliche when they’re drawn to each other because of terrifying events and Ada saves his life. As the story continues, they keep crossing paths in the future. And although it wasn’t explicitly made clear that either of them have any feelings for the other, I still have my fingers crossed that they’ll end up together after retiring from a life of spying and zombie slaughtering.

Leon and Ada isn’t exactly the ideal couple, and their relationship is up for anyone’s interpretation.

But I seriously can’t be the only one rooting for these two, right?

They kissed already. (Hint: Check out that helpful video up there and pause at 24:19. You’re welcome!) Plus, they have hordes of fan art all over the internet.

How can you not root for that?!

I’m not going to be a wuss, so I’ll come straight out and admit that I have a soft spot for opposing sides finding love with each other. That, and childhood-friends-turned-lovers are also pretty cute. And that’s why Assassin Arno Victor Dorian and Templar Elise De LaSerre are right up at the top of my best video-game couples list.

Here’s a little backstory, and there are spoilers if you haven’t played AC: Unity yet — even if it’s been 5 years already.

Arno was taken by Elise’s father when he became an orphan (after Shay Cormac murdered Arno’s daddy at the end of AC: Rogue). Like other cliched (sorry) fictional children in most stories, Arno felt partly responsible for the death of his sire, so he embarks on a mission to find the murderer (kind of like how Lelouch vi Britannia uses his mother’s murder as an excuse to rebel against Britannia).

Anyways, Arno’s mission leads him to follow in his father’s footsteps and joined the Assassin Brotherhood. And since Elise’s father was also murdered, she followed in her father’s footprints too and became a member of the Templar Order.

But because childhood friendships are for the win, and love knows no bounds, she and Arno fall in love as they work together toward their respective goals. Although, I’ll spare you the details of their bittersweet relationship.

That’s up to you to find out…

Right there at the very top of a lot of people’s video game couples list, is Tidus and Yuna…

Final Fantasy X is the story of a young woman and her journey to bring peace to a suffering world, told from the perspective of the man she falls in love with. Basically, it’s a story about two heroes embarking on an adventure and finding romance in the process.

Theirs is an “opposites-attract” kind of relationship. Tidus is the representation of an overly-emotional and rebellious teenager. He’s impulsive, and lets his emotions get in the way of sound judgment. And he also won’t accept outcomes if it doesn’t make sense.

On the other hand, Yuna is the complete opposite. Make no mistake. She also acts like a teenager, but she’s selfless and compliant. Yuna puts others’ needs before hers. And she keeps things to herself, so she won’t upset or burden anyone.

Aside from the fact that their love is so mutual, Tidus and Yuna strive to influence each other throughout the story. The rest of their star-crossed love story? I’ll leave it to you to find out.

My Final Thoughts of these Video Game Couples

Personally, I believe that every good story needs a sprinkle of love. Whether that’s love through a friendly bond, a romantic relationship between two people, or the kind of love that you have for family, a video game’s narrative just won’t be complete without it.

Love makes a story interesting — where it’s the main focus of the story, a subject that’s subtly ingrained into the narrative, or a side plot.

Looking for other top 3 lists that Scoopfed has? Check out my last article about anime shows that predicted the future.