The Scoop: We all know that in business, you have to be competitive to be able to succeed. However, these games got a little carried away. Check these video game rip-offs you might want to skip from playing.

Business is competitive. Very competitive. It is common to see companies copying each other but improving their duplicated resources to get ahead.

However, there will be times where some companies forget about improving their resources further. Some even shamelessly copied everything from their rivals save for teeny-tiny tweaks in details. And people are not stupid not to see the difference between an original and a knock-off.

Although, it is no secret that life is hard. Some people don’t have enough access to good games making them turn to rip-offs.

Unfortunately, some worse video game rip-offs will make you want to stick to the original. Here are some of them.

Pokémon Go is one of the successful apps that ever to grace smartphones. However, it is not safe from copycats and Pokéball Training is just one of those copycats. You don’t even get to train throwing balls here correctly since the physics are off. Plus, what happened to the cute Pikachu? And that Snorlax is scaring me…

The Legend of Zelda is one of the timeless games that never gets old. There will always be a new addition to the series that is better than the last. And this game is also a perfect target for brave game developers to piggyback on the famous video game. This game doesn’t try hard to hide that it’s copying The Legend of Zelda too.

Did you know that the famous and popular Farmville is just a rip-off? Zynga is apparently notorious is ripping off games. They also tried to rip off EA’s The Sims Social by creating a similar game with their own version: The Ville. This resulted in EA suing Zynga but both parties settled and dismissed the case.

Pac-Man is another unforgettable classic! However, two students think that they might get away with making a game of their own that can beat Pac-Man. And lo and behold! They made Crazy Otto. Can you differentiate this game from the original? I bet not because those legs are totally new, I didn’t recognize it was ripped off from Pac-Man. Shocking!

And yet another classic game. Even in the past, they can seem to get away from the copycats that wanted to revive the popularity that they created before. Classic Robo War, however, only changed the colors and the gameplay. Additionally, you can tell from the game description that they are trying too hard to describe that the game is not a rip-off at all. 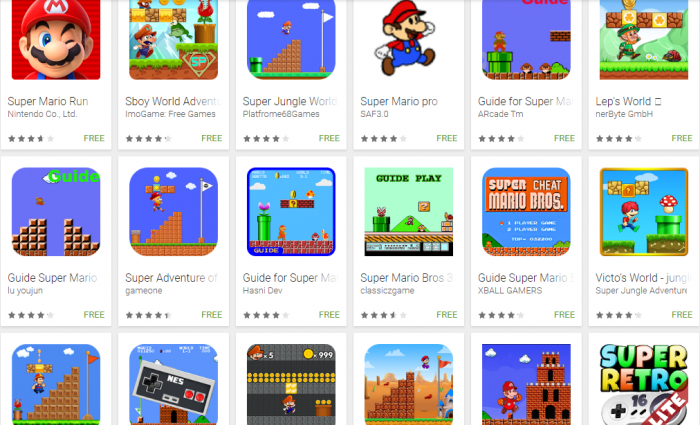 Super Mario is one of the most successful games of all time. Also one of the best-selling games too. In fact, the game is too famous that it has more shares of knock-offs that I can’t make a blog post with listing all of them. To make the search short, just type in “Super Mario” or “Mario” in Google Play Store and you’ll see so many rip-offs already.

Video game knock-offs aren’t bad. Some are doing those to show how much they appreciated the game that they are making a version of their own that is inspired by that idea.

However, be careful when doing so or you might get into legal troubles. And if you really are going to make a knock-off of a favorite game, you might as well disguise it well.

So what knock-offs have you played?

Love this article? Read up for more tech talks!